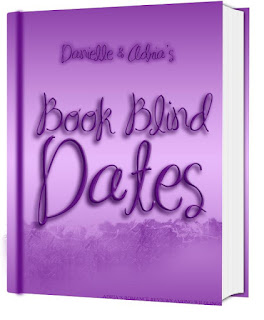 So I was recently surfing the internet doing who knows what when I came across this really fun looking meme! It's called Book Blind dates!
It's hosted by Adria @ Adria's Romance Reviews and Danielle @ Book Whore Blog. What you want to do is pick two books and post their blurbs, but remove the names of the people. (ex. H***) This way there is no cover to distract you!!
Here are The RULES of Book Blind Dates

1. Select  2 books to be the "blind dates"
2. Set them up without the covers so readers can pick without ever seeing the beauty of the cover.
3. Star out the names. (Example D****) That way if readers have heard of the characters they aren't prejudice.
4. Link up each Monday. And post the cover to your previous weeks blind dates.
5. Join in and select which blind date you would choose in others match ups.

So I feel a little awkward doing this because it seems that the only blogs doing this are Romance blogs, but this meme looked super fun!! Hopefully I did it right!

Book Date #1:
A devastated Earth's last hope is found in P***: small, mysterious orbs that fall from space and are capable of supplying enough energy to power entire cities. Battling to control the P*** are the S**** d****--political dissidents who live in massive ships in the Earth's stratosphere--and the corrupt S**** government.
J**** F****, a S**** slacker, and C***** S******, a young S**** operative, cross paths when they both venture into forbidden territory in pursuit of P****s. Their chance encounter triggers an unexpected reaction, endowing each boy with remarkable--and dangerous--abilities that their respective governments would stop at nothing to possess.
Enemies thrust together with a common goal, J*** and C**** make their way to the ruins of S**** to uncover the truth about their new powers, the past they didn't know they shared, and a shocking secret about the P*****.


Book Date #2:
F**** C**** is a girl who has been adopted and raised by Dr. C****, a member of the order of E*****, where she serves as apprentice. In a time and place where women are not seen as reasonable creatures, F**** is an anomaly, the only female to serve in the order.Soon though, she must say goodbye to Dr. C****- nearly the only person she's ever known - to assist archeologist K** S***** on a top-secret project. As her work begins, F**** is plagued by memories that are not her own and K***seems to have a particular interest in finding out what they are. F***** has also been singled out by city-dwellers who declare her part S*****.The S******, not human, ruled the city some years ago but were hunted down and killed in a victorious uprising by the people. If there are any remaining S******, they are to be eliminated.All F**** knows is what she's been told: that she is an orphan. Is F**** a S******? Whose memories does she hold? Is the mystery of F******, adopted daughter of Dr. C****, the key to the secret that lies at the heart of London?