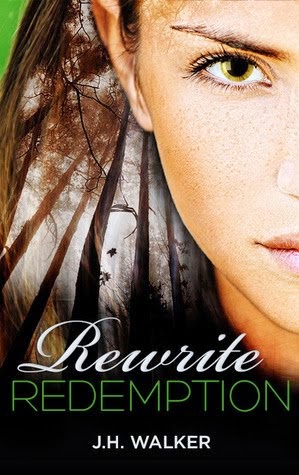 Title: Rewrite Redemption
Title: J.H. Walker
Genre: YA, Sci-Fi, Romance, Time Travel, Paranormal
Series: There will be a sequel!!!!
Received: I received this book for the blog tour and am in no way shape or form biased.
Rating: Bison

How I'd blurb it: An intense read that keeps you constantly turning the pages, making for a book that lovers of time-travel will adore.

THE PREMISE
A.J has always had the unique ability to travel through time. Here's the catch though, she can't control it. Her gift drove her mother to the edge, believing she was insane when she kept seeing her daughter disappear while no one else did. After her death A.J.'s father saw the disappearance of his daughter and resorted to drinking believing himself responsible for his wife's suicide. A.J. has always had a strong connection to the tree in her backyard and actually lives in her tree house (built by her grandfather) with her two friends Lex and Ipad. (One of which has had a past with an abusive father.)

Constantine(from here on known as C-man) has had a tough life. With alien DNA he works for a group known as the Editor's, who change the past in order to make sure Earth doesn't destroy itself. After altering the timeline for his personal gain, his brother is confined to a wheelchair, paralyzed from waist down, with C-man unable to fix it because he was confined to his own time by the all powerful Editors. Moving to Colorado with his family, trying to forget his past he meets a Shadow, whom he believes has the ability to alter the timeline without the Editors knowing.

And that is where their adventure begins.

THE PROS
1.)  I loved the time-traveling in this book! It was so much fun!!!
2.) A.J. was a great main character! At first she seemed shy and not like a character I would like, but she really grew on me.
3.) A.J. has a kindle and she likes to read. That alone makes me like her even more!
4.) I like the side story with A.J. going back in time and meeting the Native American, Hosa. That was a great side story, although it never explained why A.J. had consistent jumps to recent times (like going back just a couple decades) and then all of a sudden, two times in her life, she jumps waaaaaayyyyy back. But I still really
5.) There was a nice Harry Potter reference! Very fun!
6.) Telepathy!!!! YAY!!!!
7.) I liked the alternating view points. At first I couldn't tell the voices apart, but as I got to know the characters, it became easier.
8.) Nice reference to The Gift of the Magi. It really connected to the story.
THE CONS
1.) Sometimes instead of using indirect characterization (which flows with the story much more) the author chose to describe the person as they saw themselves. In a list like way. And this bothers me...A LOT. It is not a way I like learning about characters. Thankfully there were only a few examples of this occurring.
2.) I thought that the character, Ipod staying in the tree house and A.J.'s dad not even caring was a bit....not logical....I felt that even an often drunk dad, who still cares about his daughter would be more against a guy constantly staying with her...It was just kind of weird.
3.) There was also the part about Lex being the only nice girl to the geeks...How cliched can it get??? There were also the "mean" and "Bratz Doll" girls. It made no sense, like how on Earth was Lex the ONLY nice "pretty" girl.
4.) I really don't like the name Constantine....It felt to formal. A couple times the nickname Con was thrown in but it was a little erratic with the use.
5.) There was one point where A.J. went back in time and the things she grabbed were a bit to convenient. It felt wrong, like she should have had more difficulty.
OVERALL
I found this to be a highly enjoyable book with (for the most part) enjoyable characters and an interesting story line. It was overall a fun read with minor, easy to overlook, problems. I will definitely be checking out the next book!
WOULD I READ THIS BOOK: YES
WOULD I BUY THIS BOOK: YES
WOULD I RECOMMEND THIS BOOK: YES
WILL I READ THE NEXT BOOK: YES!!
WILL I READ MORE BY THIS AUTHOR: YES!! I can't wait to read more from this author and hope to see the writing evolve. 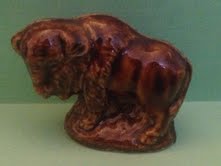 Enter the giveaway below to win an e-book copy of Rewrite Redemption!
a Rafflecopter giveaway


Click here to view the giveaway or enter above.

My life has been rather unconventional. Born insanely curious into an authoritarian, religious family, I know what it’s like to not fit in. My teen years were a struggle, and I remember them in all their intensity. That’s why I like writing for young adults.
I grew up in Central America, surrounded by jungle, and was never too far from the ocean. I observed other cultures, including an indigenous tribe that, at the time, had seen little of the modern world. While there, I slept in a hammock in a bamboo hut, dressed in tribal clothing, and helped bring three babies into the world in at the tender age of fourteen. I survived a hurricane aboard an ocean liner, canoeing through alligator infested waters, P.E., my brother’s pet tarantulas, sky diving, parasailing over the Pacific shoreline, rock climbing, a ropes course blindfolded, and walking barefoot across hot coals. I’m not done having experiences.
I attended the University of Colorado, Boulder, but was so obsessed in my quest to understand human behavior; I left midstream to travel the country and study with people doing groundbreaking work in the field. I’m certified in Ericksonian Hypnosis, am a Master of Neuro-linguistic Programming and have worked with world-class athletes, including members of the U.S. Ski Team. I’ve completed advanced studies with some of the most brilliant minds of my time in the field of NLP and am a perpetual student of sociology and human behavior.
I live with my photographer husband in the foothills of the Colorado Rockies. I’m surrounded by trees. And I will always remain insanely curious.

Author pages
Facebook Author Page
Website
Twitter
Good Reads
Amazon
You can find the rest of the tour stops here, through Around the Universe Tours.
The writer of this awesomeness is Fly to the Sky completed (or at least posted) at 6/19/2013 12:00:00 AM