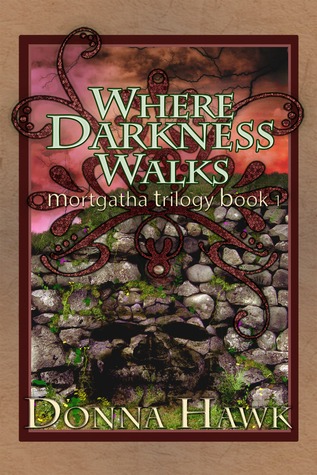 Clarie’s world is about to change for the darker. Rand broke up with her at the prom, she uncovers a secret in the hidden back of an armoire, and she meets Patrick, who is determined to help her forget her broken heart.
As Clarie evades classmate Bulldog’s stalking, she and Patrick explore the dark halls of an abandoned cement plant. After following Clarie and Patrick deep inside, Bulldog confronts Clarie as he fights with Patrick. When she is accidentally pushed against a set of dark doors into the shadow realm of Mortgatha, everything she fears is set into motion to keep her away from her beloved Earth world.
Even with Patrick’s help, the doorway home moves randomly, evil characters beset them at every turn, and the way home seems farther away than ever.
So today on the blog I have an interview with the author!

Q:Do you plan everything or just let the story flow?
A: I usually do a rough outline, generally what I know I want to happen. The problem is, sometimes the characters get a mind of their own and start stuff. Then I have to go back and change my outline or just let it flow for a while to see what they have on their minds. Characters… sometimes you just can’t tell them what to do!
Q:Do your characters ever want to take over the story?
A: Always. And then there are those times when my characters aren't speaking to me at all. I do a lot of outlining and background at that time. Pretty soon, one of them shows up and starts talking again. Depends on their moods.

Q: Are you a morning person or a night owl?
A: Not either one actually. But I guess I’m more of a morning person than a night person. I don’t mind staying up late, just don’t ask my brain to do anything that requires much thinking. In the morning, I like to get up and start my day. I hate sleeping late. Morning is definitely my favorite time of day.
Q:Where do you dream of travelling to and why?
A:I love to travel, but don’t get to do it as often as I’d like. Growing up, my dad took us to every state west of the Mississippi, including a two-month trek to Alaska. Now, the first place I’d choose to go would probably be Scotland. I want to chat with Nessie. My mom tells me my family is from there, but I’m pretty sure we don’t have family there any more. It just seems like it would be so pretty. AND they speak English, so that’s a plus for someone like me who doesn't know any foreign languages.
I've been to Sweden twice to see a pen pal of mine. That was loads of fun. Unfortunately, she passed away, but I have tons of wonderful memories of her and my trips there.
Q:Do distant places feature in your books?
A: My first two books are set in the United States and are places I’m familiar with. This new one is set in an imaginary realm, a shadow world called Mortgatha. So, yes, it would be distant. And probably not someplace I’d ever choose to go.
Q:Could you tell us a bit about your latest release?
A: It’s called Where Darkness Walks. It is the first of the Mortgatha Trilogy. My main character, Clarie Perl, get caught up and pushed through a set of dark doors to this other, dark realm. It’s full of scary characters, not all of which can be seen, that are trying to keep her there. She knows there is a rift that will send her home, but the problem is that the rift moves randomly and she doesn't know how it works.
Q:What have you learned about writing and publishing since you first started?
A: I have learned a lot, but I’m still an infant, so to speak. It’s so hard to break open any kind of notice but authors like Amanda Hocking give us indie authors a lot of hope. I know if you go through an agent, then a publisher, it could take more than a couple of years to get a book out—and that’s if they accept your manuscript. I know a lot of manuscripts don’t get the attention they deserve because agents and publishers are working so hard alongside the indie authors. Unfortunately, sometimes it’s who you know. Hmmmm, I don’t actually know a lot of people in the business.
I also know that, like a lot of things that take so much time, writing has to be a labor of love because very few authors truly hit the big times. That said, because I do love writing, I will keep doing it as long as it gives me pleasure.
Q:Is there anything you would do differently?
A:The only thing I’d do differently is I’d do it sooner. I've sat on full-length manuscripts for years because I didn't have the nerve to put myself out there. Finally, I got the nerve and I’m really pretty proud of myself!
Q:Who, or what, if anything has influenced your writing?
A:Oh, I can’t think of anyone in particular. I just remember thinking while I was in college: I think I could write something like this… Finally I decided to do it. That was years and years ago. It was only recently that I let anyone else actually read what I wrote.
Q:Anything you would say to those just starting out in the craft?
A: Keep at it. Don’t let a bad review or someone’s cousin talk you out of it. Keep writing because you’ll get better with every project. I know my second book was soooooooo much better than my first. Whatever you do, HAVE IT EDITED. There isn’t anything worse than glaring mistakes when you have such a good story. Write it, put it away for a couple of weeks, then read it again. Look for mistakes, just saying.
Wow, those are some great tips!

I have been a teacher in Kansas for 33 years. I enjoy writing, riding my bicycle, and spending time with my husband. I am an avid photographer and Photoshop user. Currently, I am working on a dark trilogy for young adults, the first of which I am hoping will be completed by the end of the summer 2013.
If you have any questions for me, you can email me at: bydonnahawk@gmail.com
You can find the author at these sites:
Website