Title: Unspoken
Author: Sarah Rees Brennan
Genre: YA, Fantasy, Mystery, Romance, Magic
Series: The Lynburn Legacy #1
Rating: Butterfly
THE PREMISE
Kami Glass loves someone she’s never met . . . a boy she’s talked to in her head ever since she was born. She wasn’t silent about her imaginary friend during her childhood, and is thus a bit of an outsider in her sleepy English town of Sorry-in-the-Vale. Still, Kami hasn’t suffered too much from not fitting in. She has a best friend, runs the school newspaper, and is only occasionally caught talking to herself. Her life is in order, just the way she likes it, despite the voice in her head.

But all that changes when the Lynburns return.

The Lynburn family has owned the spectacular and sinister manor that overlooks Sorry-in-the-Vale for centuries. The mysterious twin sisters who abandoned their ancestral home a generation ago are back, along with their teenage sons, Jared and Ash, one of whom is eerily familiar to Kami. Kami is not one to shy away from the unknown—in fact, she’s determined to find answers for all the questions Sorry-in-the-Vale is suddenly posing. Who is responsible for the bloody deeds in the depths of the woods? What is her own mother hiding? And now that her imaginary friend has become a real boy, does she still love him? Does she hate him? Can she trust him?
(Summary via goodreads)
MY THOUGHTS
I just don't know how I should feel about this book. On one hand it was a good exciting mystery but at the same time I found it incredibly slow paced and boring..... I found the writing to be..... How do I say this.... Jerky, funny sounding, something totally wrong with it. I can't describe it but I really disliked the writing style.
Reading this book I've learned a lot about myself. The biggest thing being is that I really don't like third person nearly as much as first person. It took me practically the whole book to get used to the third person. A sits not like I haven't read and love books with third person in them, but I just found it so out of place in this book.
Another problem I had with the writing style was the contractions.... Or rather the lack of them. It felt formal and unlike something that I, as a teen, would ever talk like.

"Even you could not nap on this floor," Kami told Angela.
"I don't know, a dust mattress might be very comfortable," saidAngela. "And possible orthopedic."

"Oh Rusty, why did you let her in?" Angela said. "We could have just lain down on the floor until she went away. We could've had a nice floor nap."

She was one of the weirdest and boringest characters I've ever read. She also hated all people. Something of which I can totally sympathize with.... Yet she hated LITERALLY all people.... *sigh* I get hating a lot of people but seriously ONE friend you don't hate.... That is an extreme. Overall Angela's character was just not one that I found extremely enjoyable. She was a character that annoyed me to no end.

Then of course I have to touch upon Angela's brother, Rusty. Rusty was also a very lazy person. In fact he was the masculine version of his sister as stated in the book.

"At first glance Rusty was a masculine version of his sister- tall, dark, and incurably lazy. He had the same athletic frame, which he draped on walls and furniture as if simply to week to support himself."

Yes he drapes himself on furniture.... I don't even know.....
And I was also curious as to where Angela and Rusty's parents were. They were mentioned by Rusty, but where were they? Did I miss this part? (More likely did I forget this part?)

"I'm ignoring that," Ms. Dollard said. "And I'm shutting everything up at five sharp. Do me a favor and go out and perform one of the activities I hear the youth enjoy this Friday, like defacing public property."

Don't even get me started. I hate reading about teachers who are evil, because really how many evil teachers are out there? Surprise me and write about a sweet innocent nice one! Also, the youth enjoys defacing public property? I take extreme offense to that.

There were also several random POV switched. Like normally you're in Kami's head but suddenly you're in Jared's or even briefly in Tomo's. (Kami's brother...) this wasn't clear and then it would go back to Kami and I was like, huh?

"How's it going?" Kami asked.
"Fine," said (the person who's name I'm taking out). She had the same coloring as Ash. Kami wondered how ugh more likely it was to be a sorcerer if you had a few drops of Lynburn blood in you. "How are you?"
Why was (blank) turning Kami's questions back on her? Kami thought wildly. Then she told herself to get a grip. "Also fine!" She answered. "Thank you for asking!"

At one point Kami was going around and suspecting everyone of being a bad guy so she goes up to one of her suspects and asks how they are. The suspect says fine and then asks how Kami is doing.... Kami proceeds to freak out because the suspect was doing something considered a common courtesy by many.... I get that Kami is feeling paranoid and trapped. But to suspect someone based on them asking if you were alright? I just don't understand it!

And then there is the mystery. I liked it...but I didn't find it hard to guess who was doing it. I had a good idea and I was pretty close. But I still enjoyed Kami trying to find out who it was. Definitely one of the better parts of the book.

And then there is perhaps the most important relationship in the book. Kami and Jared's.....

These two....
They drove me nuts and on multiple occasions I wanted to slap them.... And the truth is I don't even know why. Kami was constantly thinking that she didn't trust him..... Kami you can read his thoughts. You have known him since birth. If you can't trust him then there is no one in the world you can trust.

It was kind of a love triangle between Ash and Jared. But when I say kind if I really mean it. There was little interaction between Ash and Kami for most of the book. And when there was he was asking her out or kissing her or just blabbing on about life. Jared was constantly in Kami's head and get refused to touch her. So I liked Jared over Ash but feel that the world could be better without either of them.

But the biggest let down of the entire book was the ending. I don't know if you've heard but the ending is supposed to be killer. I mean tear inducing rip your heart out awful. I fully expected massive character death and major tears. And perhaps I would have gotten that if I was more connected to the characters.... But I wasn't. I was indifferent to the ending. I mean it was good but it was something I've read before. Something that will most likely be proven untrue in the next book. So for me I felt it was kind of blah.....

So it's not like this book was awful because it wasn't. But it just wasn't my thing. I am and always will be the reader who can ignore the flaws of book IF I love it. And I am sad to say that I just wasn't feeling it with this book. Not only did I find the characters boring but the execution of the entire story as well. I had heard a lot about this book. I had read the summary and immediately wanted to read this book. But it did not stand up to the high expectations I had. So on that note this is a book that I think many will love and enjoy, but it just wasn't for me.
WOULD I READ THIS BOOK: NO
WOULD I BUY THIS BOOK: NO
WOULD I RECOMMEND THIS BOOK: NO
WILL I READ MORE BY THIS AUTHOR: PROBABLY NOT
WILL I READ THE NEXT BOOK: DOUBTFUL 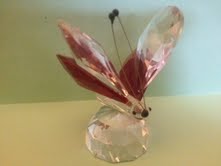