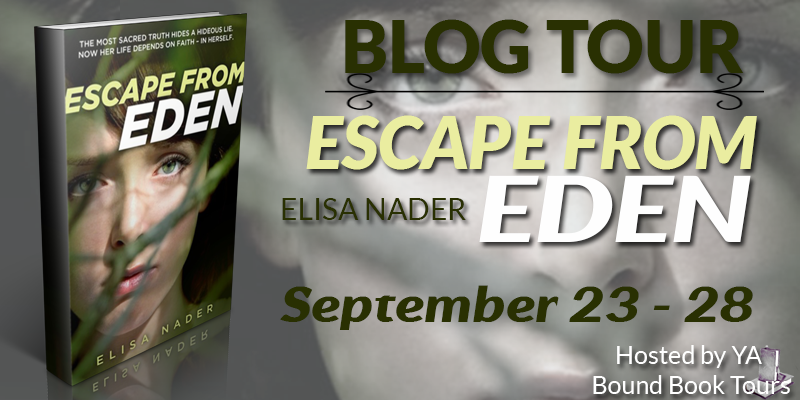 (Link to tour schedule above!) 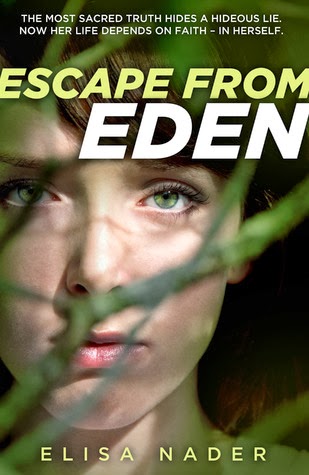 THE PREMISE
Since the age of ten, Mia has lived under the iron fist of the fundamentalist preacher who lured her mother away to join his fanatical family of followers. In Edenton, a supposed “Garden of Eden” deep in the South American jungle, everyone follows the Reverend’s strict but arbitrary rules—even the mandate of whom they can marry. Now sixteen, Mia dreams of slipping away from the armed guards who keep the faithful in, and the curious out. When the rebellious and sexy Gabriel, a new boy, arrives with his family, Mia sees a chance to escape.

But the scandalous secrets the two discover beyond the compound’s façade are more shocking than anything they ever imagined. While Gabriel has his own terrible secrets, he and Mia bond together, more than friends and freedom fighters. But is there time to think of each other as they race to stop the Reverend’s paranoid plan to free his flock from the corrupt world? Can two teenagers crush a criminal mastermind? And who will die in the fight to save the ones they love from a madman who’s only concerned about his own secrets?


Escape from Eden
Alright. How to write this review. I could write it in an incoherent mess. Or I could try really hard to gather my thoughts.
The truth o the matter is I didn't expect awesomeness from this book.
No idea why but the description never really screamed READ ME!!!
And yet there was enough to make me want to read it.
And I AM SO GLAD I DID!
This book was beyond amazing!
It was fast paced with a great romance on the side!
The characters were intense and the whole plot moved so quickly!
One of my favorite things was this book was basically about a girl.
In a cult.
Who wanted to be her own person.
And from the very beginning she knew what she wanted. Instead of reading a book with an indecisive main character Mia knew what she wanted to do.
She's probably one of the most determined heroines I've read about and that is saying a lot!
And the there was Gabriel. I loved him. No lie! I did!
He and Mia were perfect together and I loved when they interacted with each other! Their banger was so cute! And GAH!!! I just loved them.
I appreciated how the romance took a back burner instead of being the focus!
And the whole mystery part was fantastic!  It wasn't exactly a mystery about what was happening at the cult, as that was shown pretty early on, but watching Mia and Gabriel try to figure everything out and save the day was amazing!!!
I thought the Reverend was a great character and he was exactly the way I would imagine a cult leader to be!!!
The other characters had so many different layers and learning about each individual back story was fascinating!
In all this is definitely a book that I would recommend!! It was so interesting and intense and I believe that many will fall in love with the characters as I did!!!
FIVE STARS

ADVANCED PRAISE
“The chemistry between Mia and Gabriel is palpable in their teasing dialogue and sizzling moments of physical connection. Its rewards … are many: fast-moving action, a capable heroine and a resolution that leaves plenty of room for a sequel.” – Kirkus Reviews [STARRED REVIEW]

"Nader has done something amazing: written a really original novel, one full of characters you’ll care about; smart, witty dialog; and plenty of shocks and thrills. A wonderful balance of light and dark." —Michael Grant, New York Times Bestselling Author of the Gone Series

"An exciting, terrifying, page-turning thrill ride you will not be able to put down.” - Gretchen McNeil, Author of POSSESS, TEN and 3:59

About the Author
Hi. I’m Elisa. I like cheese and reading and TV show marathons. Writing is scary, but not as scary as, say, Civil War amputations. I’m an Aquarius. Uh… let’s see… I’m not very good at writing my own biography. Or autobiography. I guess this is reading more like a slightly incoherent personal ad.

GIVEAWAY:
(2) Sets of Moleskine Sketchbook, set of Le Pen colored fine tip pens, a copy of Otherkin and Othermoon by Elisa’s crit partner Nina Berry, and a personalized copy of Escape from Eden