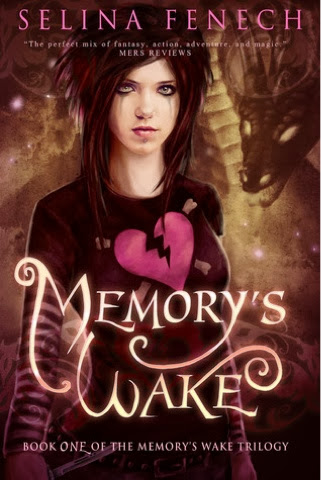 Lost in a world full of monstrous fairies, a troubled sixteen year old has to find out who she is and why her memories were stolen before she is found by those who want her dead.

She takes the name “Memory” and knows she has just one goal – to find her way home, wherever that is. But this land is strange. No technology to be seen, and iron is banned, thanks to a pact the humans have with the magical creatures who share their pre-industrial era world. In her t-shirt and torn jeans, Memory knows she’s different, even before she performs impossible magic.

Haunted by her past, chased by a dragon, wanted by the king and stalked by the strange, handsome savage that seems to know her, everyone is after Memory, and she suspects it’s not just for her eye-catching outfit. Her forgotten past holds dangerous secrets that will challenge everything she believes and risk the lives of everyone she loves.

Memory’s Wake contains over 45 illustrations by the author and artist.

Truthfully the thing I liked the most about this book is without a doubt the gorgeous drawings. At the top of each chapter there was a tiny little drawing, that perfectly fit each chapter! And then on top of that spread throughout the book there were several lager drawings that were so realistic and perfect and just... GAH! I loved them. Coming across each pictures was so exciting and I feel like I got such a great image of all the characters.

And well... Just because I said that the drawings were my favorite part does not make the rest of the book any less beautiful. I absolutely loved the characters. Memory, Eloryn, Roen, and Will. They made up such a great strong cast of characters! I loved watching their relationships develop between each other. They were strong and funny and really some great characters overall. They were so determined to take down what needed to be taken down. But also at the same time they somehow managed to protect each other.

Another amazing thing about this book was the world. In this world it was a fae world and there was a thing called a veil that actually enabled a portal to be open between that world and what I am assuming is our own. I loved reading about the fae and their influence in the world and overall that aspect of the book was fantastic.

The book was actually written in third person which was a great great thing in this case. The author made the POV really work for the characters.

The ending was also fantastic! It felt like everything was resolved even though there is going to be another book! I definitely am looking forward to seeing how the author continues the adventure and how the rest of the story plays out.

In all my rating for this book would be 4 stars. Overall I really enjoyed the book and felt their were few flaws. There were times where the authors writing felt.... Awkward and lacking a flow. But even as the book went on things slowly became steadier. I definitely am excited to see how her writing style will change in the next book!

Goodreads:https://www.goodreads.com/book/show/12035671-memory-s-wake?ac=1
Purchase:
Amazon-http://www.amazon.com/gp/product/B005502KA8/
B&N-http://www.barnesandnoble.com/w/memorys-wake-selina-fenech/1103877714?ean=2940016036694&itm=1&usri=2940016036694
Kobo-http://www.kobobooks.com/ebook/Memorys-Wake-Memorys-Wake-Trilogy/book-ggFjk88Ii0-lOlhPihV24g/page1.html
iTunes-https://itunes.apple.com/us/book/id595683715
Book trailer:http://www.youtube.com/watch?v=bYgXkt6fpAs
AUTHOR BIO
Born in 1981 to Australian and Maltese parents, Selina lives in Australia with her husband, her cute monster baby who’s far too clever, and an unnamed cat. During her life Selina has found ancient Roman treasure, survived cancer, had knights joust at her wedding, been mugged for doughnuts, made a living as a visual artist, and shared her imaginary worlds in paintings and now in her novels.

Author Links:
Website: http://selinafenech.com/
Goodreads:https://www.goodreads.com/author/show/3032940.Selina_Fenech
Facebook:https://www.facebook.com/selinafenechart
Twitter: https://twitter.com/selinafenech
GIVEAWAY!!!!!
(Sorry right now blogger is hating me and it won't so the widget!)
The grand giveaway is for THREE posters of art from the book! (THIS WOULD BE AWESOME! Have I mentioned my love for the art?!)
http://www.rafflecopter.com/rafl/display/b0f1956/
Also if you want to win an ecopy of the author's novella, Emotionally Charged, leave a comment below with a comment about the post and a way for me to contact you. (I.e. Twitter or email)
The writer of this awesomeness is Fly to the Sky completed (or at least posted) at 11/15/2013 11:55:00 PM