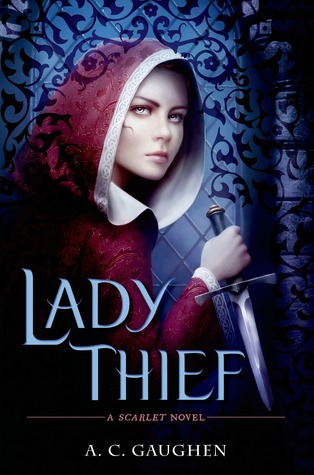 ***Warning: This review might contain spoilers for Scarlet so consider yourselves forewarned....***

Scarlet’s true identity has been revealed, but her future is uncertain. Her forced marriage to Lord Gisbourne threatens Robin and Scarlet’s love, and as the royal court descends upon Nottingham for the appointment of a new Sheriff, the people of Nottingham hope that Prince John will appoint their beloved Robin Hood. But Prince John has different plans for Nottingham that revolve around a fateful secret from Scarlet’s past even she isn’t yet aware of. Forced to participate at court alongside her ruthless husband, Scarlet must bide her time and act the part of a noblewoman—a worthy sacrifice if it means helping Robin’s cause and a chance at a future with the man she loves. With a fresh line of intrigue and as much passion as ever, the next chapter in Scarlet’s tale will have readers talking once again.
(Summary via Goodreads)

My Thoughts
STORY TIME! Yesterday I was in Barnes and Noble and I was contemplating buying a few different books. Lady Thief was one of them. For me Scarlet was nearly perfect. I completely adored the book, but I wasn't sure about Lady Thief. I am not a person who likes series that much and as much as I was anticipating Lady Thief, I wasn't sure I was ready, as I was so sure I was about to be disappointed.

I really should have more faith in the author.

There is so much I could say about Lady Thief. So many extremely spoilerly things, like: OMG THAT ENDING?! But since I don't want to ruin it I shall refrain from saying anything that could potentially ruin it for you... (But on a side note: OMG THAT ENDING?!)

One of the things that I really enjoyed about the book was Robin and Scarlet. Robin and Scarlet are my OTP. I love the two of them together and watching their relationship grow and change throughout the book made me become an emotional mess. Robin was always there for Scar whenever she needed him. She went through so much and suffered so much more than anyone ever should. Rob was also suffering from some MAJOR PTSD from the Crusades. He slowly opened up to Scar about his fears and slowly began to get over his insane nightmares.
The two of them would always run to each other when they needed comfort and help. The two of them have gone through so much and I desperately wanted them to just get that happy ending so that they could run off into the sunset together.

I think that the fact that they were willing to put so much effort and risk their lives just so they could end up together was beyond amazing. In the first book, for all that I loved them and shipped them together, I never really saw that they trusted each other beyond all else. I mean they clearly loved each other a ton, and they trusted each other with their lies, but they never seemed to develop a strong emotional trust. I could see that they really loved each other, but in this book their devotion and growth as a couple was both believable and just... perfect.

The characters of Lady Thief made me remember one of the reasons why Scarlet happened to be one of my all tie favorite books. I loved Much and his devotion to the band. I love how he fought through so much even though he was at a disadvantage so often. I loved his devotion and love to Scar. I pretty much love everything about Much. And then there was John Little, his character growth and the change that the reader saw made me fall that much more in love with him. He made choices that I fully supported and I just adore him.And then there were all the people that Scar was forced to deal with in the castle. They each had their distinct personalities and I loved the layers and depth to each of them.

Gaughen is the master of twists and turns. In Scarlet, I had guessed the twist pretty early on and was completely prepared, but in Lady Thief I figured it out the page before it was actually stated. Looking back it was completely obvious with all of Gaughen's subtly placed clues and hints, and personally it completely made the book for me. There is no doubt in my mind that Gaughen is a masterful author and I am so excited to see what she does with the last book.

I think the author has managed to stay remarkably close to the legend of Robin Hood, but at the same time has put her own twists and turns on the legend and made the story unique and completely her own. She has once again left the book at a complete cliff hanger, one that makes me desperately NEED the next book. The ending left me heartbroken and a complete emotional mess. What makes it worse is I finished it at 1:30 in the morning and I could not fall asleep for forever just because the entire thing was just TOO BEAUTIFUL AND PERFECT.

In Conclusion
Lady Thief was an emotional roller coaster. It was dark with bits of happiness shining through leaving you rooting for the success of Scar and Rob. Each page had happy and sad and hope and despair and it seem so... possible. You know when you read a book and it's just sunshine and daisies and everything works out and everyone gets a happy ending, but you know that it's not possible? Lady Thief is not that book. There is pain, but there is hope and it is all so beautifully interwoven that it gives you hope in the darkest of times. For me, I found no fault in Lady Thief. It was beautiful. It was a journey. It was perfect. And it gave me hope.
At the end I cried.... I never ever, ever cry when I read books and even right now I'm tearing up a bit. Because this book was beautiful. I don't think there is anything more I can say to try and convince you that you need to read it even more. There was so much that I never even touched upon in this review, but for me this was the perfect next installment to one of my favorite series based on my all time favorite legend. I am highly anticipating the final book and I think that fans of Scarlet will be extremely pleased with this fast paced, gripping sequel.

Two of my favorite quotes:

He broke it off with a heavy sighing. "I love you Scarlet. Go on, now, before you steal my sanity too," he said.
"Too?" I questioned
His grin by the moon were wicked and handsome. "Thief of my heart."

"Scarlet," he murmured. His hands squeezed my waist. "I've told you all along, I knew who you were from the first. I know your heart. Names, titles, hair, odd clothing choices, none of that changes who you are. And I am madly in love with who you are."