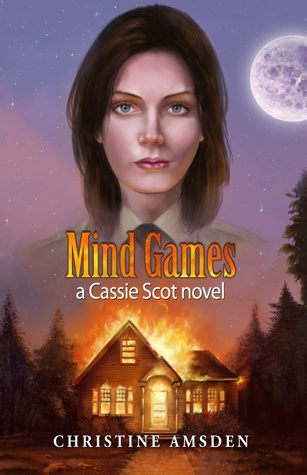 THE PREMISE
Beware your heart and soul…

Evan broke Cassie’s heart two months ago, and she still doesn’t know why. She throws herself into family, friends and her new job at the sheriff’s department, but nothing helps. The only thing that finally allows her heal and move on is the love of a new man, mind mage Matthew Blair. Cassie finds him…irresistible.

Matthew may also be the only one who can help keep the non-magical residents of Eagle Rock from going crazy over the murder of a beloved pastor’s wife. It looks like a sorcerer is to blame, but while Cassie tries to figure out who, others take matters into their own hands. With tensions running so hot, a single spark might set Eagle Rock ablaze.

MY THOUGHTS
To tell you the truth, by the third book in the series, I'm normally sick of the characters. It might have something to do with the wait between books, but more often it seems as thought the author has run out of new refreshing ideas to keep the entire book interesting.

Fortunately, this is not the case for the third book in the Cassie Scot series.

The entire cast of Mind Games is colorful, to say the least. And that is one of the reasons why this series has completely enraptured me. The author is constantly introducing new, unique, and even quirky characters that constantly make the story progress. She also brings back old characters and expertly develops their characters and makes them altogether too believable, even though they are not people you would find in our world.
Cassie's family also makes the continued interesting appearance in the novel. I loved learning a bit more about Elena, as well as the rest of Cassie's family. In the two previous books, I feel as though we still didn't know a lot about the entire Scot clan, but at this point I feel like Cassie's mother's story is even more fleshed out than it was in the previous book.

Another thing that I love about the series is Cassie's humor no matter what. There were so many points were her she truly shone as a character with her quick witted comebacks and snappy remarks. It was an aspect of the novel where, without it, the book would have been amazing, but with the added humor, and laugh out loud moments, the book became phenomenal.

I also love how each book has an individual mystery for Cassie to solve, yet it all comes together to form the bigger picture!

I loved Cassie's continued strength and independence throughout the book. She has the option of leaning on her parents for support, but instead she chooses to fight for what she wants on her own terms. Often in the books I read, this isn't a priority for many characters, but I love that Cassie values having control f her life and isn't planning to let anyone run it for her.

I also loved the constant twists and turns in the book! I wasn't expecting half of it to occur until it hit me in the face! I love how the author, in retrospect, left clues all over for the reader to find, yet did it in such a subtle manner that the reader didn't truly see it coming until it had already occurred! She is a fabulous author in that respect and would keep an reader constantly flipping the pages to find out what happens next!

The last thing I have to say is about the romance....
As you may or may not already know, a bit of a love triangle like thing occurs.... except it's not really a love triangle and is just kind of awesome! I can't explain it, but I absolutely love how the author did it! With that said, I clearly have but one ship in the series: Cassie and Evan. If they don't end up together I might just have to cry.... They are just too perfect. Their relationship is perfectly written with flaws and problems, but the author manages to write them so perfectly... I just... *sigh* Perfection!

I know that I haven't even covered nearly as much as I want to in this review, but unfortunately a lot of my thoughts are epic spoilers and I can't really ruin it for you all!

IN CONCLUSION
One of my favorite things about these books is that they are so character driven. Amsden masterfully manages to create each character and make you, as the reader, feel as though you personally know them. She develops each character so fully that the book completely sticks in your mind and makes you desperately want more. Her style as a writer is solid and easily captured me into reading every last word until the book was done. She expertly has interwoven a story with strong characters, a beautiful writing style and an amazing plot into a single story of a girl who starts off unsure of who she is and is slowly turning into a character that the reader feels proud of along the way.
I am definitely waiting in suspense for the next book (which I believe is the last in the series.)
Even after the end of the Cassie Scot series, I will definitely be following the author to read everything else that she will write. I highly recommend you begin this series immediately!

First Chapter: http://christineamsden.com/wordpress/?page_id=3118  (Warning: Contains series spoilers. New readers to the series would be better off checking out the preview of book one below.)

Christine Amsden has been writing fantasy and science fiction for as long as she can remember. She loves to write and it is her dream that others will be inspired by this love and by her stories. Speculative fiction is fun, magical, and imaginative but great speculative fiction is about real people defining themselves through extraordinary situations. Christine writes primarily about people and relationships, and it is in this way that she strives to make science fiction and fantasy meaningful for everyone.

At the age of 16, Christine was diagnosed with Stargardt’s Disease, a condition that effects the retina and causes a loss of central vision. She is now legally blind, but has not let this slow her down or get in the way of her dreams.

In addition to writing, Christine teaches workshops on writing at Savvy Authors. She also does some freelance editing work.

Christine currently lives in the Kansas City area with her husband, Austin, who has been her biggest fan and the key to her success. They have two beautiful children.

Need to check out the first two books in the series????
Cassie Scot: ParaNormal Detective

Cassie Scot is the ungifted daughter of powerful sorcerers, born between worlds but belonging to neither. At 21, all she wants is to find a place for herself, but earning a living as a private investigator in the shadow of her family’s reputation isn’t easy. When she is pulled into a paranormal investigation, and tempted by a powerful and handsome sorcerer, she will have to decide where she truly belongs.

Cassie Scot, still stinging from her parents’ betrayal, wants out of the magical world. But it isn’t letting her go. Her family is falling apart and despite everything, it looks like she may be the only one who can save them.
To complicate matters, Cassie owes Evan her life, making it difficult for her to deny him anything he really wants. And he wants her. Sparks fly when they team up to find two girls missing from summer camp, but long-buried secrets may ruin their hopes for happiness.